She is one the biggest superstars on the planet and last night I attended my first Lady Gaga concert. I’m not ashamed to say this but I’ve been a big fan ever since I first heard ‘Just Dance’ a few years back. In fact, I stated in a radio interview I did with Monash University a few years ago that I felt she had all the qualities to be around as a high profile entertainer for a very long time. Last night’s concert made feel vindicated as Lady Gaga did not disappoint.

The concert had everything you would expect at a Lady Gaga concert. She played all of her hits. There were so many costume changes that I was impressed with how quickly she changed outfits. The stage set was one of the best I’ve seen in an indoor arena and the sound was impeccable. The show had a lot of theatrics and I guess the best way to describe this concert was that it felt more like a rock/dance musical. 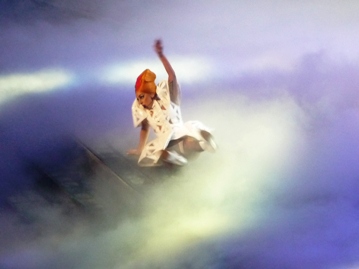 The main part of the set was a multi-levelled castle. This gave Lady Gaga and her dancers the opportunity to perform in different parts of the castle and this added to the drama of the show. At times the castle would open and reveal her band playing on different levels of the castle. 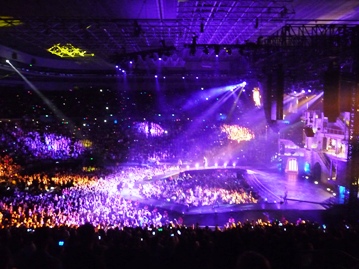 As a live performer, Lady Gaga is brilliant. She is an excellent singer and as a classically trained pianist she has strong musical chops. Combine these qualities with her great song-writing abilities and you have a fantastic show filled with wonderful pop songs that will be heard for many years to come.

A highlight for me was when Lady Gaga sat at her keyboards (that was placed in the handle bar section of a bike) and played with her band mates just like if she was playing in a bar. If a critic couldn’t acknowledge that she has the “right stuff” as a musician during this part of the show then frankly they’re not worth talking to. She played beautifully and sang the right songs for this part of the show. Lady Gaga also played a new song called ‘Princess Die’ and it was great. 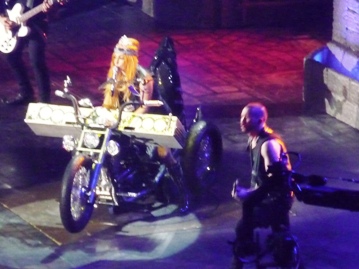 When the moments were right, Lady Gaga interacted really well with her fans. At one point while sitting down at the front of the stage a young girl handed her a scrapbook of pictures she had drawn of Lady Gaga. Impressed by the efforts of the young girl, Lady Gaga invited her backstage after the show. This lovely gesture received a huge applause from the Melbourne crowd. I guess people like to see somebody’s dream come true.

Overall, this was a fantastic show that I thoroughly enjoyed. Lady Gaga gave 100 per cent throughout the show and never took her energy level down. Now I’m not a “little monster” and I don’t put my pawes up but I appreciate great art and Lady Gaga is a great artist. For that, I applaud her and as long as she continues producing wonderful music, I’ll be a fan.