You are here: Home | Entertainment | U2 3D - Movie Review

U2 are a fantastic band with great songs. I’m stating the obvious aren’t I? How else do you explain the longevity of the band in the very fickle nature of the music business?

I’ve been a fan since I first heard “I Still Haven’t Found What I’m Looking For” from the “Joshua Tree” album. Then in 1988 they released the double album “Rattle and Hum” which coincided with the release of the film with the same name. Absolutely brilliant film and the music was amazing. Then in 1991 they released “Achtung Baby” and by that stage I was a legitimate fan. The album had brilliant songs such as “The Fly”, “Mysterious Ways” and the classic “One”. From that point onwards I’ve been to every U2 concert in Melbourne (Zoo TV tour, Popmart tour and the most recent Vertigo tour). I’ve also seen many of their concerts on DVD and I’m never disappointed. Thus when I read that U2 released a new concert film in 3D I was very interested.

To say that this film is amazing is an understatement. The obvious visual effects are fantastic but the cinematography is what enhances the film. In some scenes you feel that you are in the crowd of thousands and in others you feel as if your standing right next to the band members on stage. The surround sound adds another dimension to the performance that you did not or would not experience at the concert. However, if you stripped away all the visual effects, this movie would still be fantastic simply because U2 are one of the world’s best live bands.

If you’re a U2 fan, you’ve probably seen the film or intend to go. For those not familiar with U2’s music, this concert film is a great introduction. Don’t wait for the DVD (there is no gurantee that one will be released). Go to the cinema and embrace the amazing sound and 3D experience. You won’t be disappointed.

Learn more about the U2 3D movie 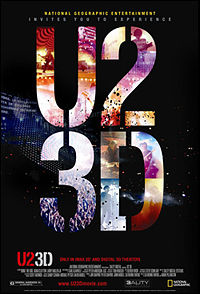