Dressed in black, Sting walked on the stage of the Myer Music Bowl to great applause as the summer sun began to go down on a beautiful summer evening in Melbourne. Sting was backed by the Melbourne Symphony Orchestra (MSO) and his 5 piece band which included female backing vocalist, guitarist, bass and 2 percussionists. Depending on the song Sting played acoustic, electric and bass guitar.

Sting began his Symphonicity concert with ‘If I Ever Lose My Faith in You’. From there he continued to perform a wide range of his songs from his days with The Police and his solo career. Like most superstar performers, Sting plays the songs that he knows his audience wants to hear. However, he also likes to play some of his lesser known works simply because he enjoys performing them. The wonderful thing about last night’s show was that there was a good mixture of his and The Police’s hits as well as some songs that were not as commercially successful. 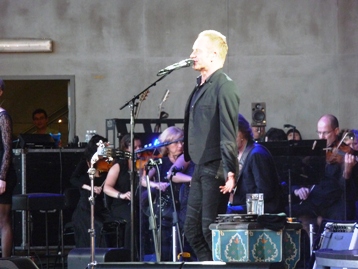 Sting is a very clever song-writer. With his lyrics he knows how to paint a picture in the listener’s mind and his musical arrangements are indicative of a man who plays multiple instruments and who understands what needs to be done musically to enhance a song. So what does Sting do with MSO? He re-arranges his songs and re-introduces his music with a completely new sound. Sting and his arrangement collaborator Rob Mathes did not simply add strings or horns to every song to give it a classical feel. What they did do was examine the existing song and then changed elements of it to give the song new life. As a result, what we heard was Sting’s music in a fresh new way. 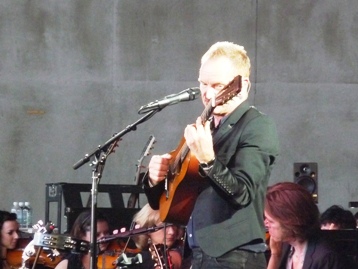 Unlike his tour with The Police in 2008 (see review) Sting often spoke to the audience and explained the genesis of many of the songs. This made me only appreciate the songs even more. Most song-writers don’t usually explain their songs especially in concert.
For me, there were many highlights. He started the show with four of his big hits including the now classic ‘Roxanne’. The arrangement on this song was superb. It was slowed down with the interplay between the MSO and Sting’s band was exquisite. Other songs that stood out for me were ‘When We Dance’, ‘Russians’ (fantastic arrangement that captured the Cold War message of the song) ‘Why Should I Cry For You’, ‘Moon Over Bourbon Street’ (mixed classical and jazz music beautifully) and ‘Mad About You’. However, my highlights list is a small indication of how I really felt about this concert because I thoroughly enjoyed every part of it.

Even though there was an interval during the concert, this did not destroy the positive vibe or momentum of the show simply because Sting, his band and the MSO sounded great and played wonderful music. Sting ended the concert with The Police classic ‘Every Breath You Take’. Of course the whole audience sang and at the end of the song the entire ensemble received an enthusiastic applause. 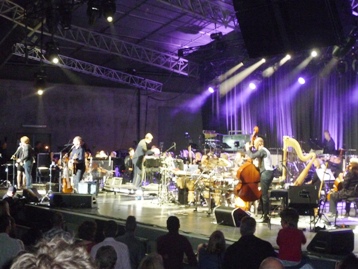 The crowd wanted more and so the encore began with the Middle Eastern influenced ‘Desert Rose’. I was pleasantly surprised to hear Sting sing in Arabic and yell out ‘Yallah’. Sting appeared to be really enjoying performing this song. By this stage, the audience (at least in the undercover part of the Myer Music Bowl) were on their feet dancing and clapping. He then played the rockier ‘She’s Too Good For Me’ and then got the audience to relax by playing the beautiful ‘Fragile’. He has re-arranged this song for live performances in the past but with the MSO this arrangement was magic. Sting ended the concert with no MSO and no band. Instead he picked up his acoustic guitar and sang ‘Message in a Bottle’ solo. The Melbourne audience sang with him, chanting “…sending out an SOS…” and with that another wonderful Sting concluded. 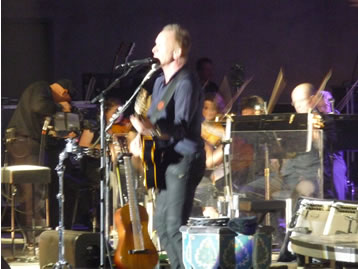 Sting. Photo taken by Steve Yanko.
All in all, this was an absolutely wonderful concert for Sting’s fans. Would I see this type of concert again? 100% yes but in the meantime I’ll watch the DVD of the Symphonicity tour which is very close to the show I saw last night. If you missed the gig last night I highly recommend the DVD.

Interval:
A Thousand Years
Tomorrow We’ll See
Moon Over Bourbon Street
End of the Game
You Will Be My Ain True Love
All Would Envy
Mad About You
King Of Pain
Every Breath You Take

Encore:
Desert Rose
She’s Too Good For Me
Fragile
Message In A Bottle