If you’re tired of listening to the standardised pop music that you continually hear on the radio today then you might be interested to know that Rick Price has released a brilliant new album called “Tennessee Sky” that is fresh and uplifting.

In an era where a lot of pop music is created by talented producers using a lot of studio technology, it is so refreshing to hear wonderful songs using real instruments and great musicianship. More impressive is that Rick Price is playing most of the instruments himself on this album. Not surprisingly, Rick Price’s good friend, guitar virtuoso Tommy Emmanuel also makes an appearance on this album.

If you are expecting an album like Rick Price’s hugely successful 1992 debut album ‘Heaven Knows’….don’t. This new album is a beautiful blend of bluegrass, country, gospel and a hint of pop. The up-tempo songs such as “Work that Fire”, “Days of Gold” (listen to Tommy Emmanuel’s guitar playing), “No More Tears to Cry” and “Dead Man Walkin’” will keep your feet tapping. Other songs such “Light on the River Jordan” and “The Heart You Left Behind” will make you sit, listen and think. My personal favourites are “Can I Get a Witness” and “You Are Not Alone”. “You Are Not Alone” is a beautiful ballad that sounds like something Billy Joel and Bruce Springsteen (amazing song writers) could have written together. It really is a wonderful song. 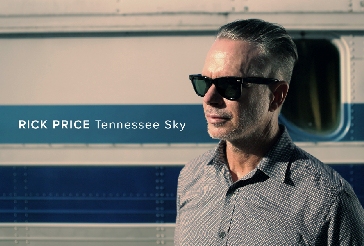 Rick Price is an amazing singer and on this album his voice is fantastic. He’s singing in different ranges on this album but I really love the sound of his pop voice in the modern country song “Tennessee Sky” and I love his vocals on the a capella song “Until We Meet Again. Rick Price’s versatility as a singer is clearly evident on this album.

Overall, this is a beautiful album because regardless of what mood you are in, you will feel better after you listen to this album. This album will lift your spirits. The songs are beautiful, the musicianship is fantastic and the lyrics are heartfelt and honest. What more do you want?

Rick Price is a wonderful musician and song-writer and this album exemplifies that the man has a good heart. You will really enjoy this album and if Rick Price is playing near you, check him out as he is a great live performer too.

Tennessee Sky is available via iTunes.