The passing of the blues legend B.B. King on May 14th 2015 ends an important chapter in 20th century popular music and his loss will have a profound effect on millions of people around the world who loved him and his music.

When Elvis Presley passed away in 1977 I was too young to understand what happened but all of the news reports about his death and seeing footage of him perform awakened something in me. Elvis’ death led me to tell my father that I too wanted to play music when “I grow up”. I was 5 years old.

By the time John Lennon passed away in 1980, I started to have guitar lessons but again I was too young to be influenced by any specific artist. I liked the music that was played on the radio and I liked the music my parents listened to such as The Shadows, Cliff Richard, Nat King Cole, Neil Sedaka, The Seekers, Elvis Presley, ABBA and of course The Beatles. It was only when my father told me that the man shot in New York City, John Lennon, was in The Beatles that I felt a connection and a sense of loss. I was 8 years old.

Now as an adult, I feel very sad about the passing of B.B. King. When I was told about his death on Friday afternoon, I yelled “No”. I just sat down and said a prayer for B.B. King and I thanked him for his music and for being a great teacher. Even though I only went to one B.B. King concert a few years ago (see review), I watched many of his concert DVDs and documentaries. I read articles and books about B.B. King and felt inspired by his life story and his music. As an adult, I felt connected to B.B. King through his music. 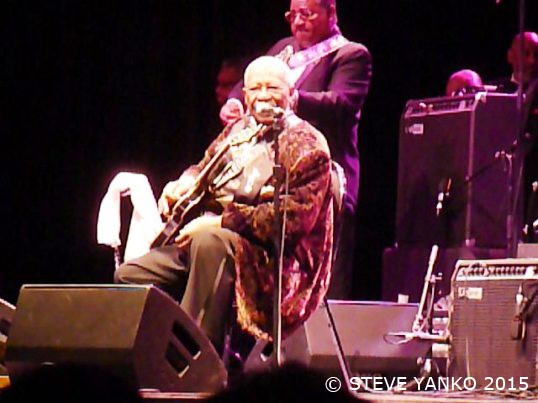 I was first exposed to B.B. King’s music in 1988 when he recorded the song “When Love Comes to Town” on U2’s album “Rattle & Hum”. I loved the power in his voice and the sound of his guitar was completely new to me. However, from that time on I was a fan and my love and respect for blues music began and continues today. Hearing B.B. King play led me to listen to the music of Eric Clapton, Robert Cray, Jimi Hendrix, Buddy Guy and Stevie Ray Vaughan.

In the days before YouTube, the only way you could listen to blues music was by purchasing the music on cassette or CD (I never bought vinyl) or you’d watch a documentary or concert on TV. My Dad or I would record these shows on VHS tapes and I would play them over and over again trying to copy these great players. My music teacher, Mr. Perry Paps, taught me the pentatonic scale but by studying the different styles of the great players I found myself developing my own style.

Since I started teaching in 1991, all of my students who studied blues with me have been exposed to the music of B.B. King. They have learnt how B.B. King bent the strings to get his sound. They understand the “call and response” of his technique, that is, he sang and then he played his guitar. They understand that B.B. King didn’t play chords. They know of the power in his voice. They hear the honesty and passion in his music.

I am proud of the fact that I, as an Australian music teacher, have exposed hundreds of my students to the wonderful technique and music of B.B. King. I never lived in the type of world that B.B. King lived in. However, through his mastery of the blues and through the honesty of his music, I felt connected to him. B.B. King was a brilliant musician and entertainer. Even though I never got a chance to meet him, I feel that B.B. King was a wonderful human being.

Millions of guitarists around the world were and will continue to be influenced by B.B. King’s music. His music and story will be studied in the same way that the lives of classical composers are studied today. He has left a positive impact on the world by bringing so much happiness to so many people through his music. For so many decades he played over 300 gigs a year here on Earth. Now that the “King of the Blues” is in heaven, I wonder if all of those fantastic musicians are playing “Let The Good Times Roll” and “The Thrill Is Gone”.

The Thrill Is Gone – B.B King