You are here: Home | General | Prince - A Musical Superhero

“Prince is dead”. “Prince has died”. These words don’t seem real to me. I find myself shaking my head in disbelief. Even worse, I find myself breaking down and crying at various times during the day and in all honesty it hurts that my musical superhero has died.

In February of this year I saw Prince perform 4 concerts in Melbourne and I wrote an article about Prince (see article). I was blown away by the positive response to the article and was pleasantly surprised when Radio New Zealand contacted me to do an interview about Prince. You can listen to the interview.

Now 2 months later, I am even more grateful that I got to see Prince live. I know I’m lucky because so many people missed out on getting tickets. I am lucky because I saw Prince in Melbourne in concert 10 times. I am also grateful that my children got to see Prince perform in concert and that they loved every minute of his show. Prince’s music has been part of the soundtrack of their young lives and his death has had an impact on them too.

Since Friday, when the news of Prince’s death was announced, I’ve been overwhelmed by the love and support given to me by musicians I’ve worked with, family, friends, current and former students. They know how much Prince’s music meant to me. On Friday morning I posted the following on the SY Music Facebook page.

“Today the world has lost a musical icon & genius. He was a brilliant song-writer, musician, producer and one of the best live performers of ALL time. He was a REAL ARTIST. He was a SUPERSTAR and there will never be another like him. God bless Prince for all of the wonderful music & for bringing so much happiness to millions of people all over the world. Let’s celebrate Prince’s incredible life by playing his music LOUD. Watch his movies and concert DVDs and enjoy the amazing MUSIC. Rest In Peace Prince. I am devastated”.

In my post I forgot to mention that Prince was a teacher. In 2014, he appeared on the Arsenio Hall show. During the show, Arsenio Hall asked Prince what job he would do if he wasn’t a musician. Prince said that he only wanted to be a musician but a few minutes later he stated he would like to be a teacher. But the fact is Prince was a teacher. As a musician, I, like millions of other musicians learnt a lot by listening and watching Prince. Whether it was how to write songs, play instruments, perform live or how to control and distribute your art in the music industry, you learnt something from Prince. He was a teacher.

Over the last few days a few of my current and former students have thanked me for introducing them to the music of Prince. While I appreciate their sentiments, I strongly believe that it would be negligent of me as a music teacher to NOT introduce my student’s to Prince’s music. I also believe that as a music teacher that I should continue to teach my students how Prince did things differently in the music industry from a business perspective.

I’ve always said that Prince was the musicians’ musician. Everybody who knows me has heard me say that he is the greatest live music performer in the world and of all time. But don’t take my word for it. Check out what Elton John, Mick Jagger, Eric Clapton, Gene Simmons, Lenny Kravitz, Lady Gaga, Justin Timberlake, Madonna, Bono, Paul McCartney, Bruce Springsteen and Stevie Wonder have all said about Prince.

If the mega stars of the music industry speak so highly of Prince then young music students and aspiring artists should familiarise themselves with the music of Prince. Prince was the ultimate musician. It is as simple as that.

In February I wrote in my article, “…Prince is a musical genius. This type of person does not come into our lives every day. Examine the music business of the last 10, 20 or 30 years and tell me which artist do you think comes anywhere near Prince in terms of the number of albums released and concerts performed? Can you name any current artist that can play multiple instruments at the high level that Prince does? Can you name any modern artist who is writing the words and music to their songs by themselves without a team of producers assisting them? Can you name an artist who is consistently respected for their musicianship by other musicians who have been or are at the top of the music business?

Prince is the complete package. He is a superstar who continually works hard at producing great music that is appreciated and brings happiness to millions of people around the world. In the future, when people write books and university courses about the music of the 20th and 21st century, they will discuss the music of Prince and his career…”.

My feelings are not unique. There are millions of people all over the world who feel the same way I do. Through his wonderful music he entered our lives and became a member of our families. We, his fans, may have not known him personally but we got to know him through his music and I think Prince as a private person preferred it that way.

Prince’s music will live forever. Hearing my children sing his songs, hearing my son play ‘Purple Rain’ on the clarinet or the guitar (he taught himself how to play it) and knowing there are many of my students performing Prince songs gives me hope for the future of REAL music. I hope that children and young people check out who Prince was and they get inspired to learn a musical instrument after listening to his music.

I can’t really imagine Prince resting in peace even though he does deserve to rest in peace. Instead, like he did on Earth, I’d like to think Prince will start hosting amazing parties in Heaven and putting on brilliant shows with the other musicians up there.

Thank you Prince for all of the beautiful, sweet, thoughtful, honest, positive and inspiring music. Thank you for always giving a brilliant live performance. Thank you for being you and setting the highest standards for musicians to aspire to. Finally, thank you for being there for your fans whenever they needed you…with your music. 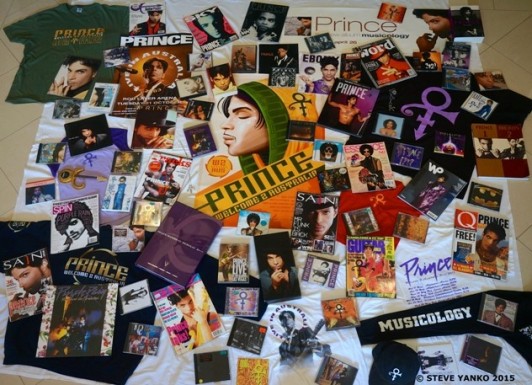 Some of Steve Yanko’s Prince Collection.