The last time I saw Paul McCartney in concert was in 1993 at the MCG in Melbourne. 24 years later I’m super excited to see one of my musical superheros again in concert and as expected he was fantastic.

Let me start off by saying I’m huge fan of The Beatles and Paul McCartney. The 1st music book my father bought me was a Beatles songbook. I’ve used that book as a student, teacher and a musician for over 35 years. My son now uses the very same book. My Dad used to play his Beatles records and cassettes often. Consequently, the 1st band I really loved as a child was The Beatles and yet they disbanded 2 years before I was born. Like millions of musicians all over the world The Beatles had a profound impact on me. In the last 25 years, I think I’ve played at least 1 Beatles songs in 90% of the gigs I’ve played. Their music still sounds fresh and powerful today. 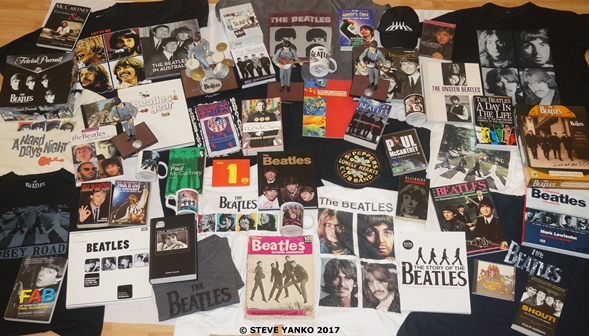 As a child I loved listening to The Beatles and Paul McCartney’s music with Wings and as a solo artist. I loved songs such as “Band on The Run”, “Silly Love Songs”, “Mull of Kintyre” and “No More Lonely Nights”. I loved watching documentaries on The Beatles and in particular I loved hearing Sir George Martin talk about how he produced The Beatles’ albums. It was by watching these documentaries as a child and seeing Paul McCartney play different instruments that initiated my interest to try playing other instruments and writing songs.

Paul McCartney is a consummate live performer. With close to 60 years in the music business how could he not be a great live musician? His playing was impeccable. It was fantastic to watch him play his Hofner bass guitar in some songs while in others he played guitar (solos included) and of course the piano. It is simply an understatement to say that Paul McCartney is a great musician. Throughout his concert he continued to impress us with his musicianship. 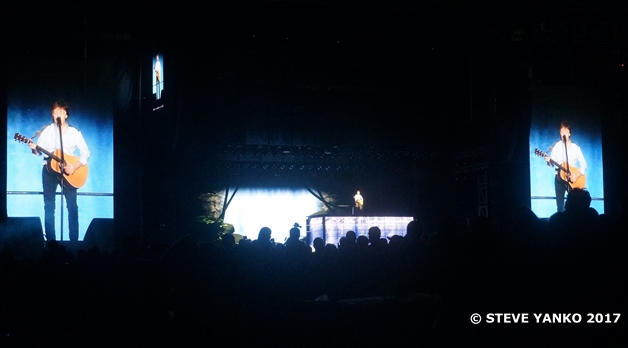 From the moment Paul McCartney walked on stage with his band the audience were on their feet. The show began with The Beatles classic “A Hard Day’s Night” and the energy in the stadium was positive. Throughout the show people of all ages were singing and clapping while Paul McCartney, the man who wrote some of the most popular songs of the 20th century sang, played bass, guitar, piano and ukulele effortlessly. Very impressive for a man who is 75 years old! 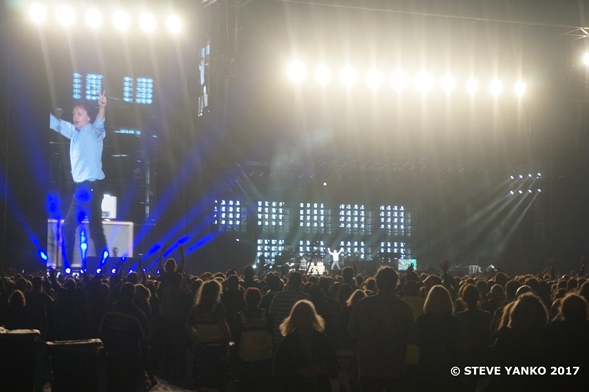 For 3 hours the Melbourne audience heard wonderful songs spanning Paul McCartney’s career with The Beatles, Wings and his solo work. Paul McCartney, as always, seemed very down to earth. He spoke to the audience regularly throughout the show but it always felt as if a friend was talking to us and not an iconic musical superstar. Throughout the show Paul McCartney would tell stories about how or why a song was written. For instance, he told the story of how he and John Lennon and 3 other guys recorded a demo as The Quarrymen and then performed that very song. Imagine being a teenager, recording a demo and then 60 years later performing that same song to a packed stadium on the other side of the world. 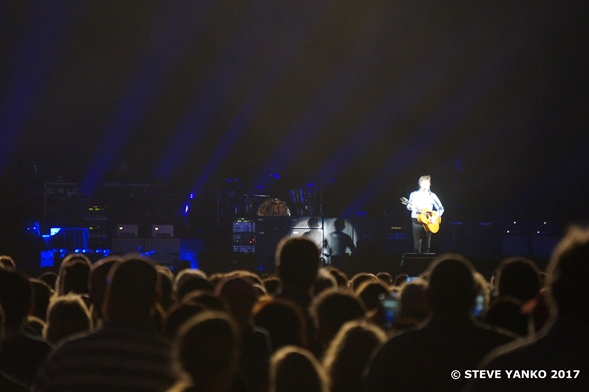 The visual effects and lighting for the show was fantastic. The use of fireworks in this outdoor concert only enhanced what was an epic event. Thank goodness for the large video screens as it was often difficult to see the action on stage from where I sat. This is mainly due to the fact that the audience in front of the stage stood for most of the concert. But I have no issues with people standing at a concert, especially at a Paul McCartney concert.

Great visual effects were used in the concert. 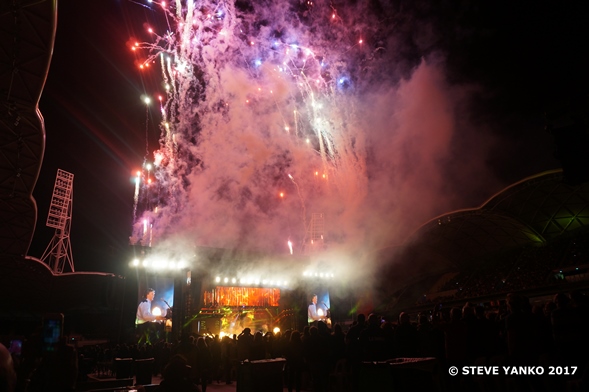 Paul McCartney’s band comprised of keyboards, drums, guitar and another guitarist who also played bass when Paul McCartney played another instrument. These skilled musicians brought to life songs that The Beatles recorded but never performed live. To hear songs such as “A Day In The Life” or “Being For The Benefit of Mr. Kite” from the classic album “Sgt Peppers Hearts Club Band” was remarkable. Performances of songs such as “Live and Let Die” and “Band on the Run” also highlighted the virtuosity of Paul McCartney’s band. Simply, you could not fault the band. 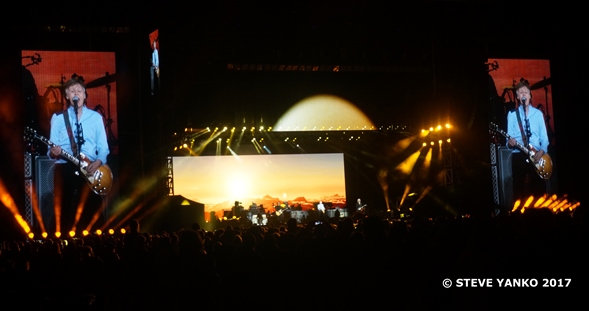 Paul McCartney has written so many brilliant songs and so it must be difficult for him to choose which songs he will perform. While he didn’t play all of his hits (such as “Coming Up” or “Jet”) or every single Beatles song, he still played so many great songs that I doubt a single fan would be disappointed with the set list. It was an exhilarating experience just to hear all of these great songs, especially to hear so many songs by The Beatles. Not only were the songs chosen fantastic but the order in which they played gave the concert a sense of momentum that made a 3 hour concert feel short. I guess time flies when you’re really having fun. 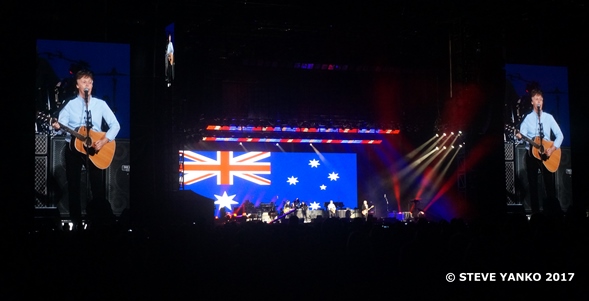 Paul McCartney’s tribute to his friend and Beatles band mate, George Harrison, was powerful. I loved hearing Harrison’s song “Something” performed on ukulele and then with the entire band.There were so many highlights for me during this concert but to hear “Hey Jude”, “Let It Be”, “Blackbird”, “Eleanor Rigby” and the masterpiece “Yesterday” performed by the man who wrote these amazing songs was an awesome and emotional experience. 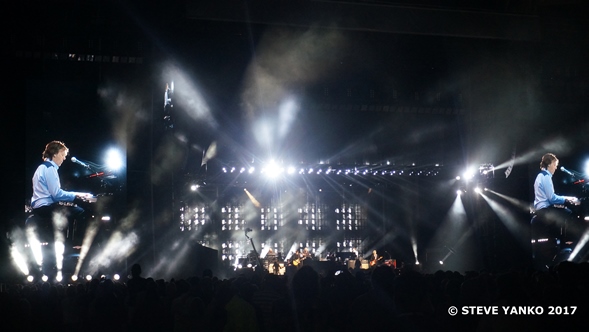 Paul McCartney played many of his iconic songs.

Paul McCartney gave his fans a wonderful show. His music spans a variety of genres and last night we were given a show that was interesting, dynamic, and beautiful because we heard so many great songs that lifted our spirits. Last night, strangers of different ages, cultural backgrounds and localities sang together with great joy the songs of Paul McCartney. As one of the best composers of all time, Paul McCartney has for over 50 years made millions of people around the world feel happy. 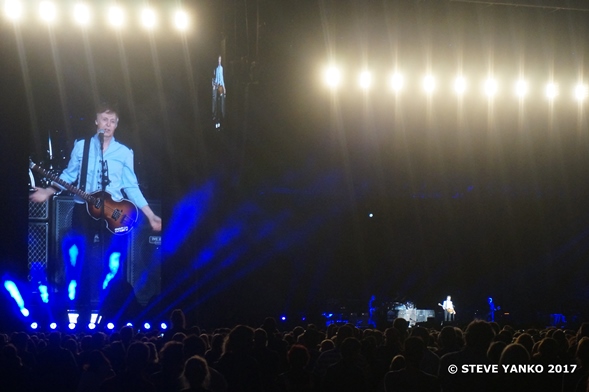 Last night, Paul McCartney made thousands of people feel elated and I will always feel inspired, blessed and grateful that I got to see one of my musical superheros be brilliant in concert. 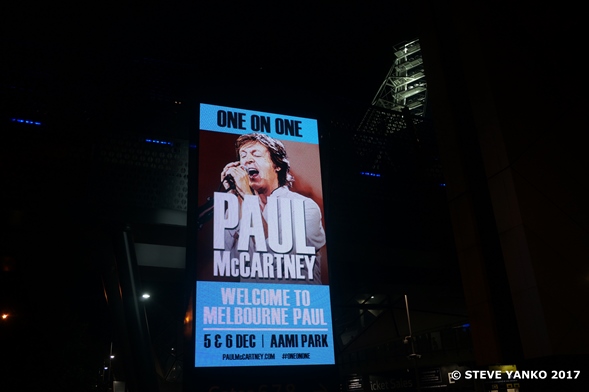 SET LIST
A Hard Day’s Night
Junior’s Farm
Can’t Buy Me Love
Letting Go
All My Loving
Let Me Roll It
I’ve Got a Feeling
My Valentine
Nineteen Hundred and Eighty-Five
Maybe I’m Amazed
I’ve Just Seen a Face
In Spite of All the Danger
You Won’t See Me
Love Me Do
And I Love Her
Blackbird
Here Today
Queenie Eye
New
Lady Madonna
FourFiveSeconds
Eleanor Rigby
I Wanna Be Your Man
Being for the Benefit of Mr. Kite!
Something
A Day in the Life
Ob-La-Di, Ob-La-Da
Band on the Run
Back in the U.S.S.R.
Let It Be
Live and Let Die
Hey Jude