Madonna has been an icon in the music industry and pop culture for over 30 years. Last night I attended her concert in Melbourne as part of her Rebel Heart Tour and I have to say it was a great show.

As you would expect from a Madonna show, the production budget is huge. As a result, the concert staging was dynamic and the visual imagery displayed on the large screen on the main stage was fantastic. The main stage area incorporated a smaller stage that could be tilted and performed on. Furthermore, the staging included a log runway which had a smaller stage area in the middle section and then a stage area in the shape of a heart at the end of the runway. Throughout the show Madonna and her dancers used all aspects of the stage and so I doubt anybody could complain that they couldn’t get a good view of Madonna. 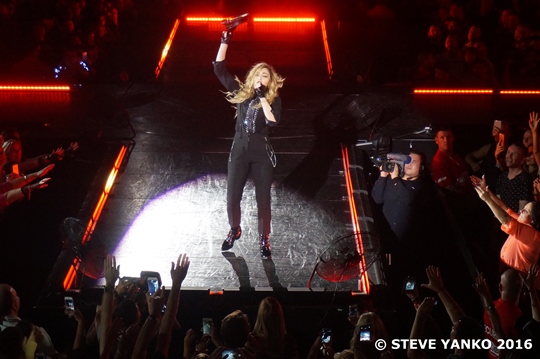 Madonna’s dancers were amazing. Obviously with her background as a dancer, Madonna chose people who would bring her artistic vision to life and they did not disappoint. The different costumes used by the dancers throughout the show were extraordinary, especially the costumes used in the opening song. Madonna had numerous costume changes during the show which I guess were used to set the tone for different sections of the show. 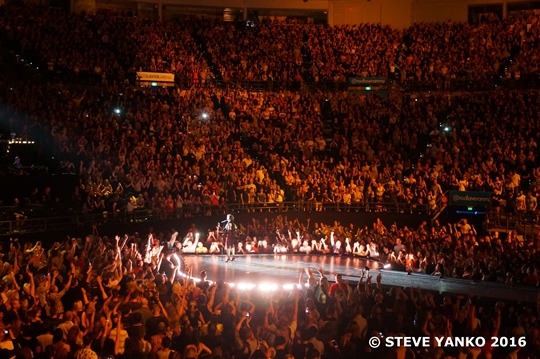 The “Queen”, Madonna plays her guitar on the heart shaped stage.

Madonna’s band comprised of 2 keyboard players, 1 drummer who also played percussion, 1 guitarist and 2 backing vocalists. During the show, I watched the band very closely as it was a small band and I was curious to see how they would replicate the big sound in Madonna’s songs. It was obvious that the band was playing to a lot of sequenced tracks. More refreshingly, it was great to see Madonna playing electric guitar in “Burning Up” and acoustic guitar in “Rebel Heart”. It was also great to see Madonna play songs on the ukulele, especially hearing her do a version of Edith Piaf’s “La Vien Rose”. 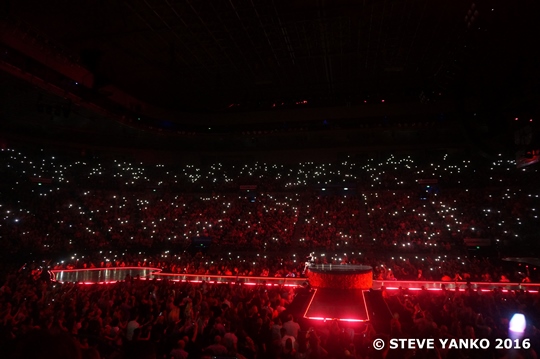 Madonna performing on the centre stage surrounded by her fans.

As the name of the tour implies, most of the songs played were from Madonna’s latest album “Rebel Heart”. So I guess the hard core Madonna fans would be happy to be in her presence regardless of the set list. However, walking out of the arena and listening to people talk about the show I think a lot of people would have loved to have heard more of her hit songs. From memory, the hit songs Madonna performed were “Burning Up”, “La Isla Bonita”, “Music”, “Like A Prayer”, “Material Girl”, “True Blue”, “Deeper and Deeper”, “Holiday” and “Like A Virgin”. I really loved the new sound of “Like A Virgin”. The version performed on the tour is so good it should be released as a single. 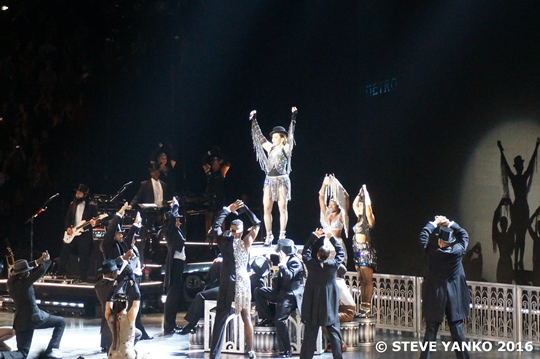 Overall, I really enjoyed this concert even though it felt more like a theatrical show compared to other concerts I’ve been too. It was clearly evident that Madonna is a real artist who puts a huge amount of effort, thought and money into producing her shows. Having seen Madonna perform in Melbourne on her Girlie Show World Tour in 1993, I was not expecting a “greatest hits” type of concert where the majority of songs performed would be the artist’s most popular songs. Nevertheless, I think if Madonna played 3 to 4 more of her hits, more people would have loved the show even more. 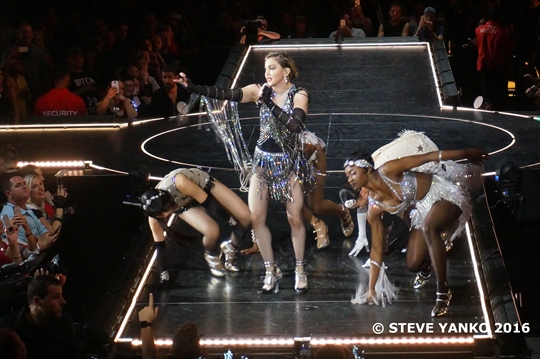 Madonna performed with great energy throughout her concert.

Madonna is an artist who deserves to be respected. In the 1980’s her music was heard everywhere and from the beginning of her career up until now she continues to inspire millions of people all over the world. As fans we may not always understand her artistic choices or fully comprehend the messages she gives through her art but at least she is making an effort to produce great art. Last night’s concert was another example of Madonna producing great art. 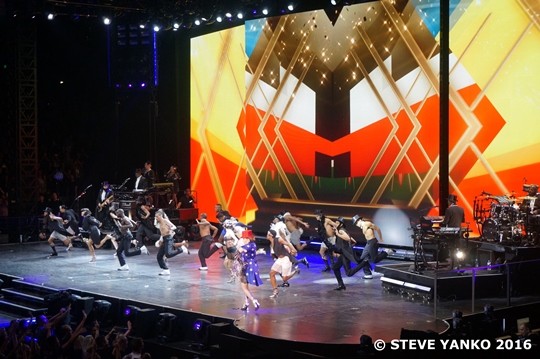 Madonna with all of her dancers and band. Madonna is wearing the blue coat & red top hat.

PS. Madonna’s performance of Bach’s Minuet in G on her “…favourite instrument…” was excellent. 🙂