Having seen Lenny Kravitz on his first tour of Australia in 1994, I was eagerly looking forward to his return visit to Melbourne and I have to say the man did not disappoint.

Lenny kicked off his concert with ‘Come On Get It’, a song from his new album Black and White America. The crowd at the Myer Music Bowl were on their feet from the second that Lenny walked on stage. Lenny performed all of his hits and the Melbourne crowd appreciated the fusion of rock, pop, soul and funk music that Lenny played. Backed by a very tight band that comprised of a 3 piece horn section, keyboards, percussion, drums, bass and his right hand man Craig Ross on guitar, Lenny performed with so much energy that the crowd simply reacted positively throughout the show. 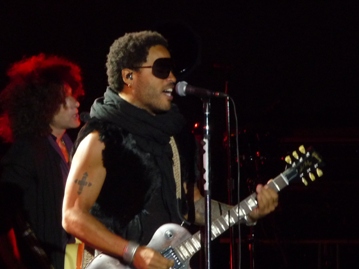 The song choice for the show was fantastic and the songs flowed beautifully from one song to another. Not one boring moment throughout the show! Lenny regularly spoke to the audience and apologised to the Melbourne crowd for not returning to Australia sooner since his last tour. However, he did vow that he’ll back soon and of course the crowd responded enthusiastically.

For the guitar enthusiasts, Lenny played many different guitars in the show. He mainly used Gibson guitars and his playing was fantastic. I really loved his playing on ‘Always On the Run’ and ‘Are You Gonna Go My Way’. Vocally, Lenny was excellent. His vocal versatility was evident in songs such as ‘It Ain’t Over Till Its Over’ which highlighted his falsetto voice but songs such as ‘Believe’ and ‘Stand By My Woman’ showed off his pop/soul voice. 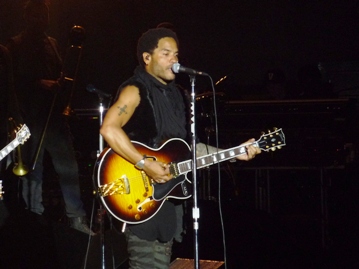 Other than the music and energy on stage the one thing I really enjoyed about this show was Lenny’s enthusiasm. He looked so happy on stage. The one thing that I think attracts people to Lenny Kravitz is his honesty in his music. I guess if you want to know Lenny Kravitz, just listen to his music and you will find a genuinely warm, spiritual and passionate person.

The whole show was brilliant but the highlight for me was the 15 minute version of his 1st single ‘Let Love Rule’ which was the last song of the night. The band was so tight during this song and Lenny Kravitz made the huge crowd feel as if we were a gospel choir by making us sing the chorus a capella. During the song, Lenny Kravitz walked through the crowd and ensured that we continued to sing the chorus. This artist and audience interaction gave me goose pimples and was one of my best concert experiences.

Lenny Kravitz’s fans already know that he is a superstar but last night’s concert only solidified our opinion.