As a kid, one of the first bands that grabbed by attention was KISS. I had the posters, swap cards that came with the KISS chewing gum, face make up and even KISS dolls which I still have today. Like most people my age the song ‘I Was Made For Lovin’ You’ was the first song of theirs that I heard. Last night after all of these years I went to my first KISS concert and it was fantastic.

Etihad Stadium was the venue for last night’s show and it attracted the members of the KISS Army. Many wore a variety of KISS t-shirts and the face make up of their favourite band member. I also saw many children attend the concert with their parents and grandparents which gave the concert a great, dare I say it, family vibe. 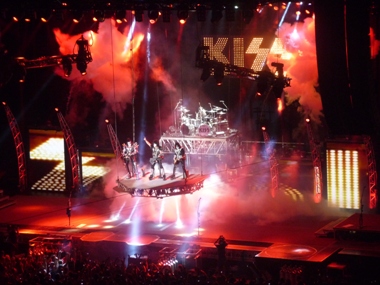 The show began when a huge curtain bearing the band’s name fell to the stage floor and in a burst of light and stage effects Gene Simmons (bass guitar), Paul Stanley (guitar) and Tommy Thayer (guitar) descended to the floor via a platform high above the stage. The 1st song KISS played was ‘Detroit Rock City’ and they played it with a lot of energy. This performance set the precedence for the rest of show and the audience was bombarded with full on rock for the rest of the night. 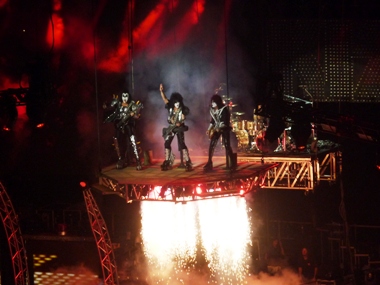 KISS played many of their hits as well a few new songs from their latest and critically acclaimed album, Monster. I would have loved to have heard ‘Shandi’ and ‘Sure Know Something’ but this was a hard rock show and I guess playing any of their ballads was not part of KISS’ plan. 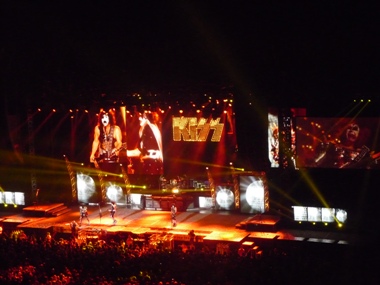 KISS putting on a great show. Photo by Steve Yanko.

The show contained the theatrics you would expect at a KISS concert. Thus, we saw Gene Simmons spitting fire and blood (not real kids). We even saw Paul Stanley use a flying fox to travel from the main stage to a small platform at the back of the stadium to perform ‘Love Gun’. Another highlight was watching Tommy Thayer and Eric Singer (drums) perform together without Gene and Paul. The interplay between both musicians was fantastic. It was also very cool to see the drum kit moving off of the stage like a small moving rocket. 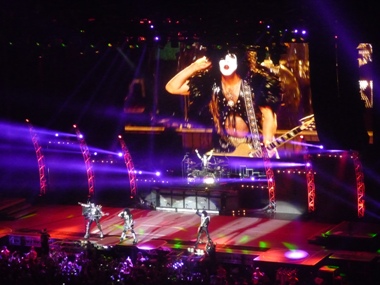 KISS’ Paul Stanley listening to the audience in Melbourne. Photo by Steve Yanko.

I had heard from some friends that the concert would be very loud but the sound level was excellent and the mix was great. The stage set was absolutely brilliant. There was pyrotechnics, video footage and an assortment of lighting effects which just added to the experience of enjoying the good music.

Paul Stanley as a front man knows his stage craft and knows how to get a response from his audience. He regularly spoke to the crowd as if they were his friends and he still has all of his dance moves. I’ve always liked his voice but last night I was really impressed by his guitar playing. 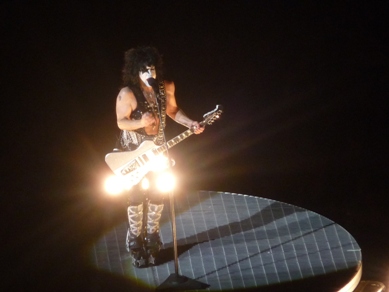 Gene Simmons is a charismatic guy and so a lot of the time I found myself watching what he was doing on stage. If you’ve watched his TV show ‘Family Jewels’ and watched him perform in KISS it’s like watching two different people. Either way I respect him for his showmanship and business acumen. 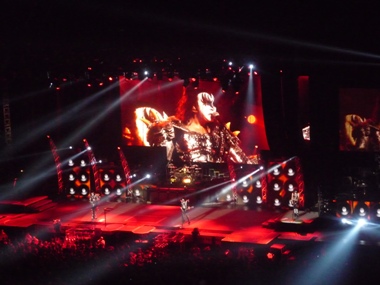 I can’t comment negatively about the set list KISS played. They played a lot of their hits and the songs flowed easily from one song to another. If anything, if the show was a little longer they could have included a few more of the hit songs. However, as a first timer to a KISS concert it was a great show and I really enjoyed the songs they played. 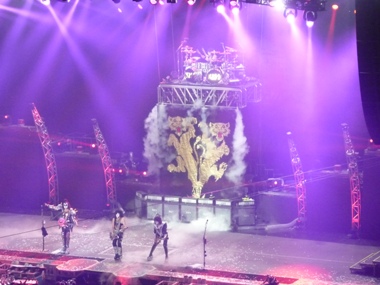 The members of KISS are great entertainers & musicians. Photo by Steve Yanko.

It’s hard enough to have a successful career in the music business but it’s even harder to stay there. KISS has had a successful 40 year career and all you can do is admire their tenacity, dedication to their fans and their ability to be a great and entertaining band.

1.Detroit Rock City
2.Shout It Out Loud
3.Calling Dr. Love
4.Firehouse
5.Hell or Hallelujah
6.Christine Sixteen
7.Outta This World
8.Psycho Circus
9.I Love It Loud
10.Crazy Crazy Nights
11.War Machine
12.Love Gun
13.Rock and Roll All Nite
Encore
14.Lick It Up
15.I Was Made for Lovin’ You
16.Black Diamond