Last night Keith Urban performed at Melbourne’s Rod Laver Arena and again it was another triumphant show.
The show started with Keith Urban casually walking to the stage singing “Love’s Poster Child” a song from his latest album ‘Fuse’. The 2nd song of the night was the popular “Sweet Thing” and from there the Melbourne audience got to hear a lot of songs from the ‘Fuse’ album and many of Keith Urban’s hits. The set list for the show was fantastic and as a result the show flowed beautifully. Keith Urban was backed by a powerhouse 4 piece band that replicated the nuances of the studio versions of the songs confidently for the stage. 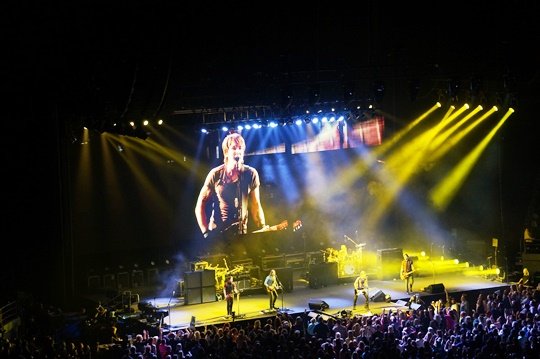 Keith Urban & his band back in Melbourne 2014. Photo by Steve Yanko.

It was great to hear older songs such as “Kiss a Girl”, “Stupid Boy”, and “Better Life”. From the new songs I really enjoyed hearing “A Little Bit of Everything” and hearing Brooke Schubert (new talent from Queensland) sing the Miranda Lambert’s (US country superstar) part on the duet “We Were Us”. 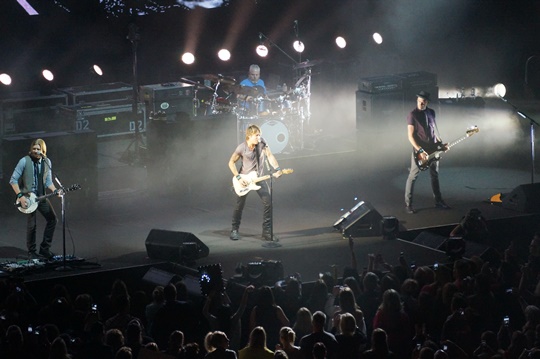 As per usual Keith Urban was warm and genuine and regularly talked to the audience. At one point during the show he took the time to read some of the signs people created and even invited an audience member up to the stage to talk to Keith about her sign. 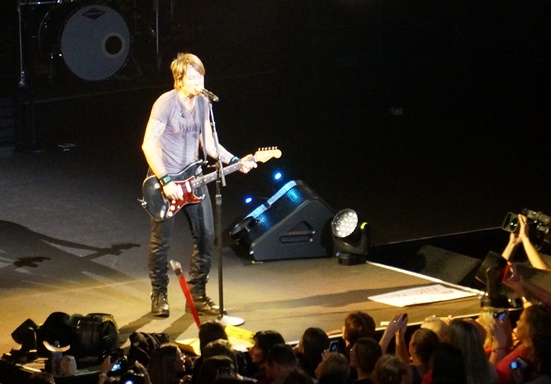 One of the nice aspects of the show was hearing Keith Urban dedicate a few of the songs to his wife, actress Nicole Kidman. Incidentally, yesterday was their 8 year wedding anniversary. Keith Urban told the story of how a conversation he had with Nicole Kidman before they got married inspired his hit song “Once in a Lifetime” and then did a brilliant performance of the song. He also dedicated “Without You” to her and played it solo on his beautiful ’64 Stratocaster guitar. Hearing this song performed in this way was a highlight for me. He also played solo “Making Memories of Us” (a song he played at his wedding) on an acoustic guitar. 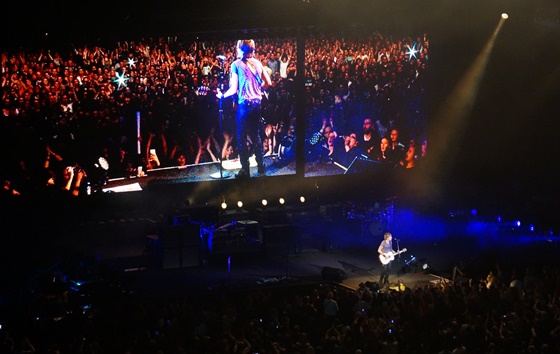 Keith Urban performing ‘Memories of Us’. Photo by Steve Yanko.

Keith Urban’s guitar playing was exceptional last night. He is definitely one of the best guitarists to come out of Australia. His solos are well crafted in that not only do they enhance the songs but show his high level of musicianship. Furthermore, the tone of his sound is amazing. For the guitar enthusiasts, he played a variety of Fender Stratocasters, a couple of Fender Telecasters, a Les Paul Junior, a Les Paul Gold top and a Maton acoustic guitar. 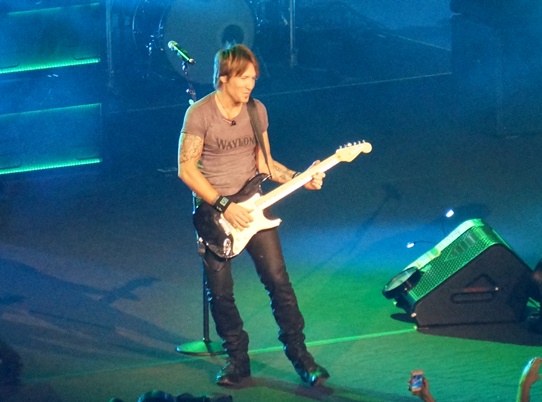 Keith Urban is a wonderful entertainer and it is always a great experience hearing the Melbourne audience sing while he listens and smiles. Last night’s show was a great sing-along. As he usually does, Keith Urban walked into the audience to sing his hit “You Look Good In my Shirt” and then gave away a guitar to a young girl in the audience. 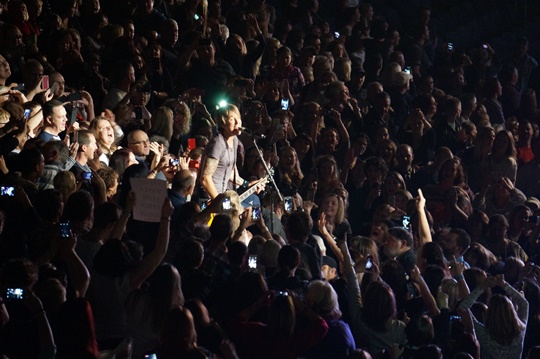 Keith Urban performing amongst his fans. Photo by Steve Yanko.

Overall, you can’t fault this show. While Keith Urban seems to be very down to earth and casual, the music is tight, well-structured and uplifting. I’ve said it before and I’ll say it again, metropolitan radio stations in Australia should play Keith Urban songs. We should be proud of Australian musicians who have had successful careers overseas. 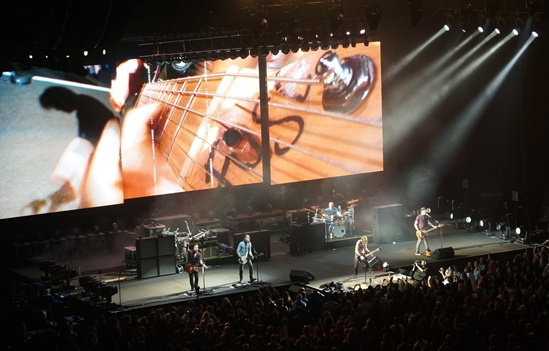 Keith Urban with his ‘Fuse’ guitar. Photo by Steve Yanko.

For those people going to a Keith Urban concert, be prepared for a great show filled with great music performed by a brilliant musician and genuinely nice guy.

By STEVE YANKO
PS. I saw Nicole Kidman last night in the box directly behind me. Happy Anniversary!