In December of 2009 I attended my 1st Keith Urban concert and back then I didn’t know any of his songs (see review). However, I did know he was a great guitarist. Nearly 18 months later I’m a huge fan and absolutely love his songs. I was really looking forward to this concert and Keith did not disappoint.

Keith Urban’s show started with the lights going down and the audience erupting into a massive roar. The lights come and there’s Keith and his 4 piece band kicking the show off with “Put You In A Song” from his latest album. From the get go, the band was energetic and tight. Song after song was played with great effort and Keith’s vocals sounded fantastic. He moved from one part of the stage in easy fashion, that is, it was NOT choreographed in some sort of pre-determined way. This was a real musician playing real music! 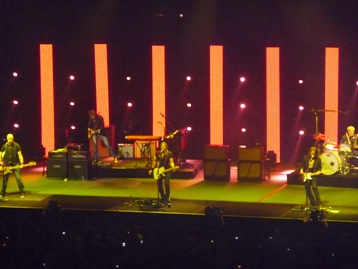 Keith Urban and his band performing in Melbourne, Australia. Photo by Steve Yanko.

Keith’s guitar playing throughout the show was amazing. The solos were beautiful and varied. For those technically minded musicians, Keith just doesn’t play pentatonic scales but rather uses all styles of solos to enhance the song. Keith has a wonderful ability to play parts of a solo while singing a different melody. This is not very easy to do but adds more texture to the sound of a song. I really loved the solos on “Raining On Sunday”, “Kiss A Girl” and “Better Life”. He used a variety of guitars during the show including Fender Telecasters, Fender Stratocasters, Les Paul Junior and a Gibson 335. As I was sitting at the back of Rod Laver Arena it was difficult to see what acoustic guitars he was using but at one part of the show he used a nylon string acoustic during the ballads.

At one point during the night, Keith walked through the crowd (his security next to him) and performed on a small stage at the back of the venue. It was wonderful to see that people were able to take photos of their idol’s performance so close to them. Even better was to see a superstar, shake hands with his fans and great them with warmth and affection. On the small stage he performed “I’m In”, “Once In a Lifetime”, “You’ll Think Of Me” and “Days Go By” . He played “You’ll Think Of Me” solo and allowed the audience to sing with him. The band joined in towards the end of the song to great effect. During this part of the show he switched between electric and acoustic guitars. 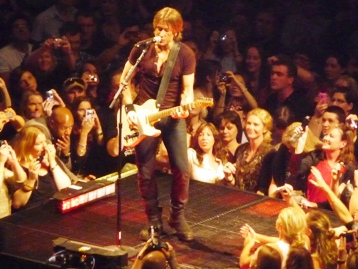 Keith Urban performing on a small stage at the back of Rod Laver Arena, Melbourne. Photo by Steve Yanko.

One of the highlights of the show was his performance of “You Look Good In My Shirt”. At his last Melbourne concert he sang the song within the audience on the side of the stage. Sure enough, Keith did the same last night except last night he gave some very lucky fan his guitar. From where I was situated it appeared that he actually signed it and then gave it to the fan. Absolutely brilliant gesture on Keith’s part!

The order of the songs performed blended very well together. There was the right mix of big rockers to the beautiful ballads such as “Stupid Boy” (powerful guitar solo), “Without You”, and “Making Memories Of Us”. Keith also performed the popular song “Always On My Mind” and had the audience singing with him from start to end.

After he finished, “Who Wouldn’t Wanna Be Me” Keith said “goodnight” and walked off the stage but there was no way the audience was going to let him go. With screams from the crowd wanting more, Keith appeared back on stage solo with an acoustic guitar and performed the Cold Chisel classic “Flame Trees”. Again the audience sang with him from start to finish. His band members joined him on stage to perform “Tonight I Wanna Cry”. I love the recorded version of this song but I really enjoyed this acoustic guitar arrangement that was performed last night. A great song will always shine on a piano or guitar and “Tonight I Wanna Cry” is an example of my belief. The show ended with an awesome and energetic performance of “Better Life”. As usual, Keith’s guitar playing was impeccable and the solo only highlighted that he is a clever and one of the best guitarists on the planet. 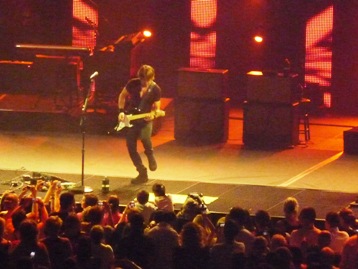 Overall, I thoroughly I enjoyed this concert. There wasn’t one dull moment in the entire show. The stage setting was very minimal compared to other concerts I’ve been to but the lighting was fantastic and really enhanced the whole concert experience. I personally don’t know Keith Urban (maybe one day) but what I saw last night in his performance is that he is a genuinely warm and very down to earth person. His music is positive, energetic and contains great lyrics with powerful messages about life and love. Really, what more do you want? Thanks Keith for a wonderful show! Hope to see you back in Melbourne….real soon!

PS. As I wrote my review I began to reflect on Keith’s music and I couldn’t understand why his music is not played on Melbourne radio stations. His songs have great hooks, killer choruses and wonderful messages. His music is not strictly country music. It’s a combination of rock, country and pop. Don’t agree? Listen to “Kiss A Girl”. If Bon Jovi songs such as “Wanted Dead or Alive” and “Always” get regular airplay on stations such as Mix FM and Triple M then why no Keith Urban songs on these stations? To his credit, Keith Urban has made it huge in the US without any radio support from Australia. Furthermore, it’s because of his great songs and showmanship that he can fill large venues in Australia. Nevertheless, Australian radio stations need to support Australian artists by playing their music. How else will our industry survive?