In light of the fact that The Rolling Stones celebrated their 50 year anniversary this year I decided to read Keith Richards’ autobiography called Life and I have to say it is a fantastic book.

If you’ve ever seen Keith Richards being interviewed you will always hear a man who understands music and who is passionate about music. Forget about the image that the media usually portrays of Keith Richards as a stoned, out-of-his-head musician. As Keith Richards stated in his book, he’s been sober/clean for over 30 years. Keith Richards is a very intelligent man and his insights in this book only re-affirm this.

The way the book is written is very direct in that Keith Richards just tells it like it is. You may disagree with some of his views (apparently Mick Jagger did) but this book is about Keith telling us about his life and his views on the world. 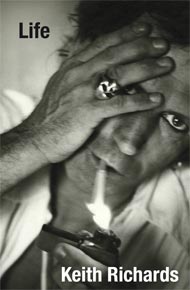 In this book we learn about how from a very young age, Keith Richards always wanted to play guitar. His maternal grandfather first started to teach him how to play at a very young age and then Keith continued on his successful musical journey. We learn about his childhood and his life in the town where he grew up, we learn about how he and Mick Jagger were childhood friends and how their love for the blues solidified their friendship in their youth. Keith Richards talks about his life at art college, the formation of the Rolling Stones, his relationships with all of the different members of the group, song writing, guitar playing, touring, recording, working with different musicians, his love life and of course the excesses of drugs and alcohol.

When you have written some of the world’s most popular songs, travelled the world many times in arguably the world’s biggest band and met so many people, you inevitably will have many great stories to share. Keith Richards tells many amazing stories and as a result this book does not contain one boring page and that is a great feat when you consider that the book has 547 pages.

If anything, before you read this book I suggest that you read a book about the Rolling Stones so that you not only appreciate the band’s story but it will give you a better understanding of Keith Richards’ perspective on key events in the Rolling Stones’ history.

I’ve always liked Keith Richards. This book only reinforced my appreciation of his talents as a song writer and a musician.