George Benson is an amazing guitarist and last night I had the great pleasure of watching this musical master of the guitar perform at the beautiful Regent Theatre in Melbourne.

The night started off really well with the support act Grace Knight performing some great songs. She was backed by a trio (piano, bass, and drums) of competent jazz musicians whose arrangements matched her fantastic vocal style. Grace’s set list was short, sweet and entertaining simply because she performed the right types of songs for the audience. Her wonderful performance got the audience in the mood for the main act.

George Benson started his show with the instrumental ‘Affirmation’. Based on the performance of this very song the audience knew they were in for an awesome show. For a man nearly 70 years of age, George Benson had a lot of energy and gave his audience an entertaining show. In between songs he would talk with his audience and sometimes explain the story about a song.

George Benson and his band played a fantastic set which included most of his popular songs. The band comprised of keyboards (to cover synth, horn, string parts), bass, drums, guitar and piano. All the players were top class musicians with extensive experience playing for other big time performers. During the concert George Benson welcomed highly regarded bassist Marcus Miller to the stage and he played a few songs including ‘Brazilian Stomp’, originally a duet performed by George Benson and Earl Klugh.

Throughout the concert, George Benson showed his versatility as a guitarist. The songs played ranged from jazz, pop, disco, funk and blues. His solos on the guitar were breathtaking and his signature trick of singing (scat style) in unison while playing a solo was used to great effect. Furthermore, George Benson’s vocals were superb and this was highlighted in his performances of the ballads such as ‘This Masquerade’ and ‘In Your Eyes’.

Overall, this was a wonderful concert that not only showed that George Benson is a brilliant musician and awesome entertainer but that he is also a very warm person. By the end of the night the whole audience was on their feet dancing to the great music. As a musician, I thoroughly enjoyed this show because it is rare to watch a true master of their instrument live…especially in my city. George Benson easily satisfied his audience because he played the songs that they loved. When George Benson is next in town….go and see him!

Here are some of the songs George Benson played: 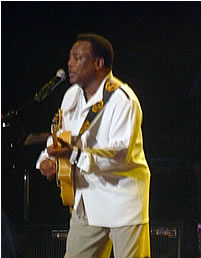