Last night I went and saw Elton John in concert and again I was NOT disappointed. Now Elton John was here last year but I’m not complaining. One night a year listening to Elton performing his greatest hits is a fantastic way to spend an evening.

The night began with the 1st support act called Elisa Schmidt whose music is a bit difficult to describe other than to say it was enjoyable. Her voice sounds like a cross between Macy Gray and Norah Jones and she was by backed by a tight band even though I did feel sorry for the guitarist whose amplifier stopped working during the performance. The 2nd support act was the brilliant 2 Cellos. The 2 Cellist are Luka Sulic and Stjepan Hauser. Apparently they were discovered by Elton John via YouTube and then were asked to join his band. Anyway, last night they performed Michael Jackson’s ‘Smooth Criminal’, U2’s ‘With or Without You’, Nirvana’s ‘Smells Like Teen Spirit’ and ACDC’s ‘Highway to Hell’. During this song, the guys were joined by members of Elton John’s band and this really got the audience moving The Melbourne audience loved these guys’ performance and they got a standing ovation.

Elton John’s band began the concert by playing the opening chords of ‘The Bitch Is Back’ and when Elton John walked onto the stage the audience erupted. At the end of the opening song there was enthusiastic applause from the audience and Elton John quickly launched into ‘Benny and the Jets’. He then proceeded to play many of his most popular songs. Elton John’s voice sounded fantastic and his piano playing never disappoints. 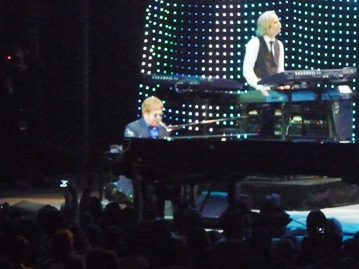 What I really love about Elton John’s playing is that he can effortlessly switch from playing in a classical style in songs such as ‘Tiny Dancer’ or ‘Candle In The Wind’ to a blues or rock style in ‘I’m Still Standing’ or ‘Saturday Night’s Alright For Fighting’. His piano solo work on ‘Rocket Man’ and ‘Honky Cat’ was exceptional and really highlighted his superior playing skills. 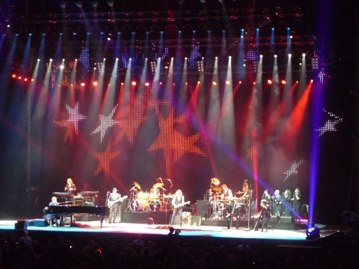 Elton John and his band. Photo taken by Steve Yanko.

Elton John was supported brilliantly by his band which comprised of Drums (long time Elton John drummer Nigel Olsson), percussion, Keyboards, Bass, 2 cellos, 4 female backing vocalists and Davey Johnstone (another long time Elton John band member) on guitar. As you would expect, the band was very tight and the sound quality was excellent. Every instrument could be heard clearly and this is important as Elton John’s music is beautifully arranged. Looking at the big screens at the concert it was clear to me that Elton John was having a lot of fun playing with these musicians. 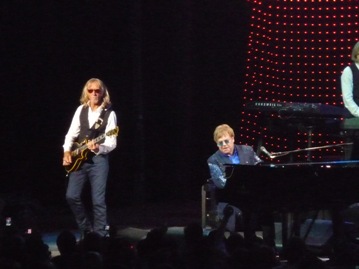 I don’t believe anybody could complain about the set list for the concert. It was great to hear the hits but it was also nice to hear songs such as ‘Grey Seal’ which don’t get a lot of radio airplay. The good thing about an Elton John show is that you know you are going to hear fantastic songs. One of the highlights of the concert was to hear the Melbourne audience sing ‘Crocodile Rock’. It just sounded wonderful.

Despite all the hype about Elton John’s extravagance and temper tantrums, I was always get the sense that he appreciates his success and doesn’t take it for granted. As an example, after he came out for the encore, Elton John walked to one side of the stage to the other signing people’s Elton John memorabilia. This took about 5 minutes and I can only imagine how wonderful it felt for the fans who had their item signed by Elton John. After signing people’s items, Elton John sat at his piano and thanked the audience for his great life (I’m paraphrasing) and then began to play the song launched his amazing career, ‘Your Song’. As per usual, the audience responded enthusiastically and then Elton John ended his brilliant concert with ‘Circle of Life’. 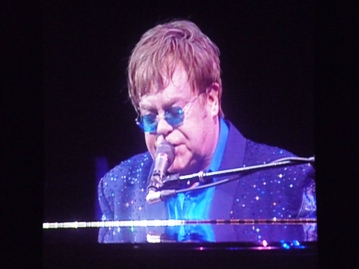 I’ve been lucky enough to attend several Elton John concerts and again he didn’t let his audience down. Great songs, great performances…what more do you want?

SET LIST
1.The Bitch Is Back
2.Bennie and the Jets
3.Grey Seal
4.Levon
5.Tiny Dancer
6.Believe
7.Mona Lisas and Mad Hatters
8.Philadelphia Freedom
9.Candle in the Wind
10.Goodbye Yellow Brick Road
11.Rocket Man (I Think It’s Going to Be a Long, Long Time)
12.Hey Ahab
13.I Guess That’s Why They Call It the Blues
14.Funeral for a Friend/Love Lies Bleeding
15.Honky Cat
16.Sad Songs (Say So Much)
17.Sacrifice
18.Daniel
19.Don’t Let the Sun Go Down on Me
20.Are You Ready for Love
21.I’m Still Standing
22.Crocodile Rock
23.Saturday Night’s Alright for Fighting
Encore:
24.Your Song
25.Circle of Life