When I started playing guitar there were many guitarists a young person could look up to. Before I got into the music of Jimi Hendrix, Mark Knopfler, Eric Clapton and all the blues greats there was a guitarist that my father let me listen to. It was Hank Marvin from The Shadows. As a young kid I had a cassette that contained many of The Shadows’s songs and I remember listening and trying to play great songs such as ‘Apache’ and ‘Atlantis’. I didn’t have an electric guitar then but I ended up learning how to play those songs by ear.

When I was a teenager, my father recorded on video a concert that was featured on the ABC that was the 25th Anniversary of Cliff Richard and The Shadows. After watching that concert, my musical journey only got better. I remember that I used to sit in front of the TV and learnt every song played in that concert. I was always blown away by Hank Marvin’s guitar playing. He was and still is a major influence on my style of playing. There was no way I was going to miss an opportunity to watch him perform with Cliff Richard and The Shadows to celebrate their 50th Anniversary as performers.

From the outset I have to say that this was a brilliant concert. Cliff Richard and The Shadows were so tight and the sound was fantastic. The visual effects throughout the concert were great and basically enhanced the concert experience. More importantly, the group played all of their popular songs. The audience was mainly an older crowd (older than 50 years old) but with music there is no age. Everyone sang and clapped as if they were relieving their youth. The guys on stage put on an energetic show and the audience loved it. 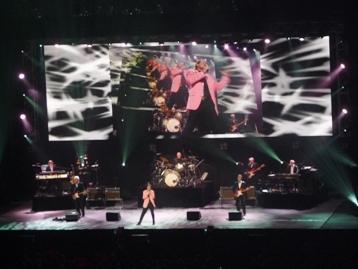 Cliff Richard and The Shadows in Melbourne. Photo taken by Steve Yanko.

The show started with the upbeat ‘We Say Yeah’ and then came one great song after another. In the 1950’s and early 1960’s many songs were under 3 minutes long hence many songs were played in this concert. One of the many things that was great about this show was that The Shadows got the opportunity to showcase their talents twice in 2 sets. The 1st set was fantastic and Hank Marvin’s beautiful guitar playing did not disappoint. However in their 2nd set they played the classic ‘Apache’, ‘Foot Tapper’, ‘Atlantis’ and one of my favourites (which I still play in many bands I’ve been in) ‘FBI’. The Shadows were impeccable and they included their famous choreography of including kicks in time with the snare drum accents. As I sat watching this great set, I started to reminisce about the time when I was a teenager, who by this stage had a red (just like Hank’s) Fender Stratocaster copy, sitting in front of the TV trying to learn the songs. I felt the tears well up in my eyes. After all it is not everyday one of your guitar heroes is playing live in front of you.

Cliff Richard’s voice sounded fantastic. He may be close to 70 years old but this hasn’t stopped him from being a wonderful entertainer and singer. He danced and moved from one side of the stage to the other effortlessly throughout the concert. The audience really enjoyed the stories and jokes he told and the banter on stage between Hank, Bruce Welch (rhythm guitarist) and Cliff was good too. It was also good when The Shadows explained the stories behind the songs they performed. Basically, all of these guys know how to connect with their audience. 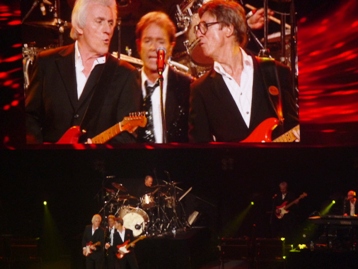 The concert included a few costume changes. At the start of the concert the guys came on stage wearing vintage 2 piece suits. The Shadows wore the same suit while Cliff, as front man, wore a different suit. Cliff changed clothes several times but The Shadows dressed in casual in the 2nd half of the show. There was also an acoustic set in the show and again Hank Marvin’s technique shone through. 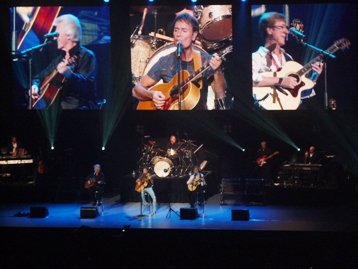 One thing I really loved about this concert is that Cliff Richard and The Shadows played their major hits. They played ‘In the Country’, ‘Living Doll’, ‘Do You Wanna Dance’,’ I Could Easily Fall (In Love With You)’, ‘Lucky Lips’, ‘On the Beach’, ‘Summer Holiday’, ‘Bachelor Boy’,’ Visions’, ‘Move It’ and ‘The Young Ones’. I was very satisfied with the songs performed but I am certain that some Cliff Richard fans were expecting to hear his solo hits such as ‘Wired For Sound’ or ‘We Don’t Talk Anymore’. As for The Shadows, I really loved what they performed but I would have loved to have heard them play the ‘Theme from The Deer Hunter’. 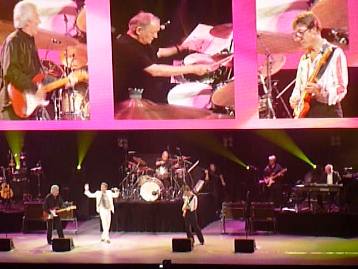 Overall, this was a wonderful concert and based on last night’s show its no wonder Cliff Richard and The Shadows are celebrating 50 years in the entertainment business.

SET LIST
First Half
1.We Say Yeah
2.In the Country
3.Gee Whiz It’s You
4.A Voice in the Wilderness
5.Living Doll
6.Dancing Shoes
7.I’m the Lonely One
8.A Girl Like You
9.Do You Wanna Dance