Bruno Mars is one the most popular male artists on the planet at the moment and based on what I saw at his concert last night, this guy is going to be around for a very long time and he totally deserves all the success he is enjoying.

Bruno Mars began his show with a full forced version of his song “Moonshine”. He was backed by his tight eight piece band which comprised of drums, keyboards, bass guitar, guitar, 3 piece horn section and a backing vocalist who also served as an MC (similar to those in a soul revue). The band members were impressive and were a major part of the show as they interacted with the audience and participated in the choreographed dance routines. 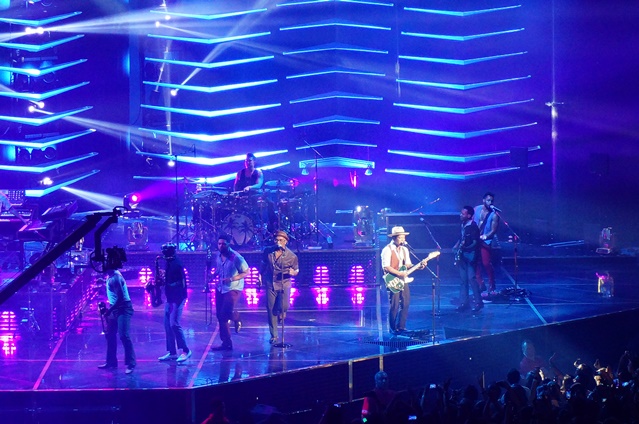 Bruno Mars and his band in Melbourne, 2014. Photo by Steve Yanko.

During his first address to the audience, Bruno Mars stated that the band had travelled “…a long way to play…” and that that he wanted to keep the audience “moving…and dancing”. This is what he wanted and that’s exactly what the audience did. How can the audience not dance when the bulk of the music was a fusion of up-tempo pop, soul, reggae and funk music? The pop disco song ‘Treasure’ highlighted the band’s great musicianship and dance prowess and as a result entertained the Melbourne audience. 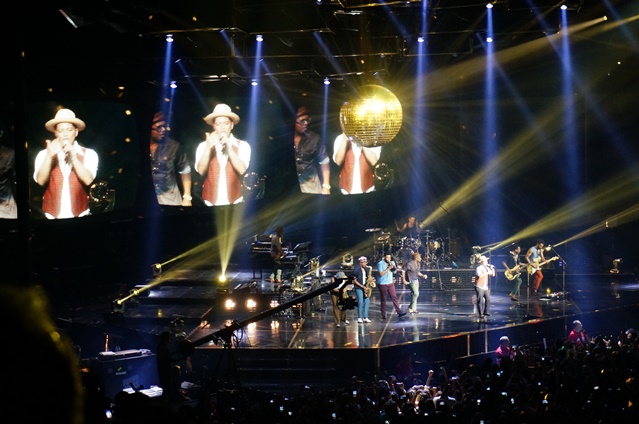 Bruno Mars began a medley of songs with a theme about money with the Australian chant of “Aussie, Aussie, Aussie” to which the audience responded with “Oi, Oi, Oi”. He then started to sing the classic 60s song “Money (That’s What I Want)” and incorporated the guitar riff from Chuck Berry’s “Johnny B. Goode. Bruno Mars then segued into his song “Billionaire” which had the audience singing at the top of their lungs. At one point during “Billionaire” his backing vocalist began to sing Aloe Blacc’s “I Need a Dollar” before Bruno Mars returned to sing “Billionaire”. 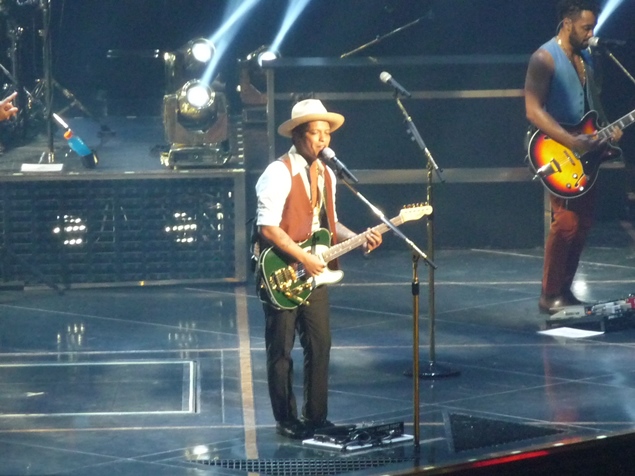 In another medley that got the female audience screaming, Bruno Mars sang his songs “Show Me” and “Our First Time” before he sang the chorus to Ginuwine’s “Pony” and R.Kelly’s song “Ignition” before finishing again with “Our First Time”. During this medley, Bruno’s voice was soulful and his use of falsetto was excellent.

Throughout the show, Bruno Mars shared his musical influences by including references to a variety of songs while still performing his own songs. For instance, the song “Marry You” was given a new vibe simply by adding a great horn arrangement that is not in the recorded version of the song. However, Bruno Mars added a part of Prince’s guitar solo from the song Purple Rain. I wonder how many people in the audience noticed this. Furthermore, in the song “Runaway Baby” he made references to the Isley Brother’s song “Shout” and while the band played a James Brown inspired instrumental, Bruno Mars danced the way James Brown did. This was just brilliant to watch and the audience responded enthusiastically. The screams were deafening! 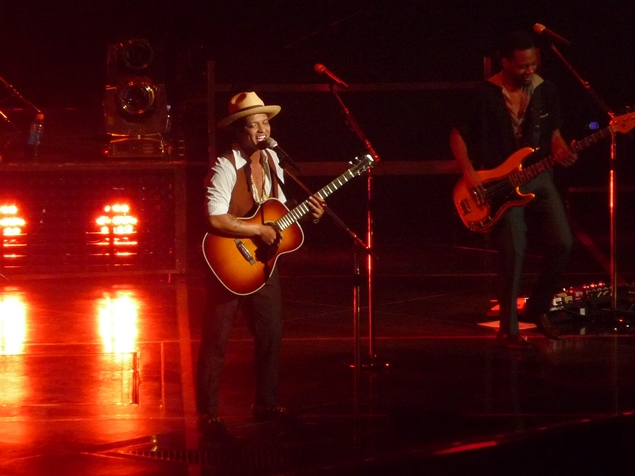 Before he performed his monster hit “When I Was Your Man”, Bruno Mars stated this was the hardest song for him to write and the most difficult song for him to sing. This was truly a moving performance and to hear the Melbourne audience sing was simply breath-taking. From the first time I heard “When I was Your Man” I’ve been telling everybody that it is a perfect pop song and hearing it last night only reaffirmed my belief. 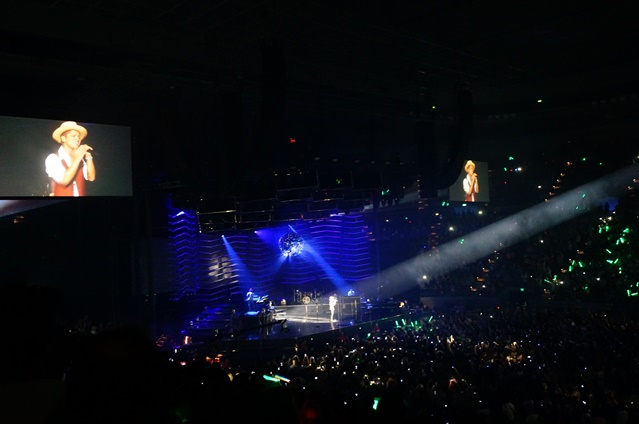 Bruno Mars performing ‘When I Was Your Man’. Photo by Steve Yanko.

One of the cool aspects of this show was that the live versions of the songs sounded so fresh and invigorating due to the new arrangements that are not in the recorded versions. For instance, last night’s version of “Grenade” began with a beautiful classical piano prelude and then during the song there was a trumpet solo. To end the song, Bruno Mars played a great solo on the guitar which clearly showed that he has some skill as a lead guitarist.

For the encore, Bruno Mars played a drum solo on a rider high above the stage. At the end of solo the band began to play “Locked Out Of Heaven”. Again, the audience sang and danced enthusiastically and the band played with great passion. 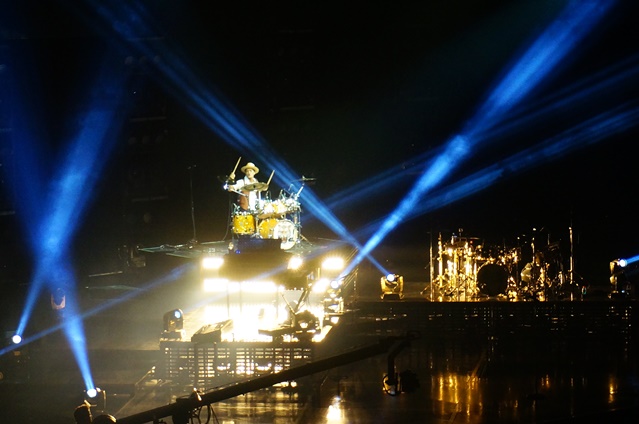 Bruno Mars’s voice was full of energy and at the end of the song he ended the concert by saying “Thank you Melbourne. Goodnight!”. 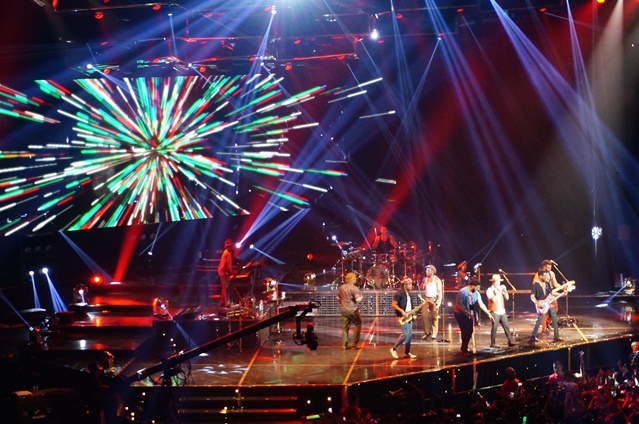 Bruno Mars and his band finishing his concert. Photo by Steve Yanko.

It is very difficult to fault a concert like the one I saw last night. Bruno Mars’ voice sounded fantastic. He played many of his hit songs. He was entertaining and appeared very genuine as a person. His band sounded amazing and the lighting production was brilliant. If anything, I think some people would have liked for the concert to be a bit longer. Other acts such as Sting, Elton John, Prince and Bruce Springsteen play for over 2 and half hours and I suspect that as Bruno Mars releases more albums and his repertoire increases so will the duration of his shows.

Overall, I thoroughly enjoyed every minute of this concert. Bruno Mars is every record company executive’s dream. He looks good and sounds good. However, more importantly Bruno Mars is a fantastic song writer, musician and entertainer whose music connects with the masses. I’ve always liked him but seeing him live for the first time, I am convinced that the guy will be around for a very long time and he is a genuine superstar.

If you’ve seen his show or are going to his show then that’s great. However, if a DVD of this tour is released, go and get it because you will love it.