I really can’t remember any part of my life in which I didn’t hear the music of the Bee Gees. It was the combination of the Gibb brother’s fantastic vocals, the memorable melodies and the brilliant arrangements in the songs that really grabbed my attention. One of the biggest regrets in my life us that I never got to see the Bee Gees perform live in concert. However, last night I went to the Barry Gibb concert as part of his Mythology tour.

Last night’s show began with a video clip featuring all the members of the Bee Gees, that is, Maurice, Robin and Barry Gibb. At the end of the video the drummer began to play a beat which made the audience clap in time. When Barry Gibb walked on stage the Melbourne audience erupted in a loud applause. Barry greeted the audience with a “Good evening Melbourne….ok here we go!” and he began to sing the disco classic ‘Jive Talking’. 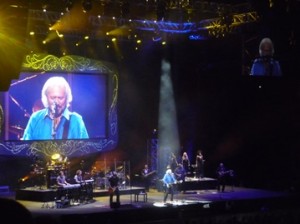 The 11 piece backing band comprised of Barry Gibb’s son Stephen on guitar and Maurice’s daughter Samantha on vocals. The band included 2 guitarists, 1 bassist, 1 percussionist, 1 drummer, 2 keyboard/synth players and 3 female backing vocalists. The band sounded fantastic. All of the arrangements sounded as close to the original recorded versions of the songs and the orchestral arrangements were played beautifully by the keyboard/synth players.

Barry’s voice sounded wonderful. He could still the falsetto strongly and his mid-range vocals sounded great on all the pre-disco Bee Gees songs. 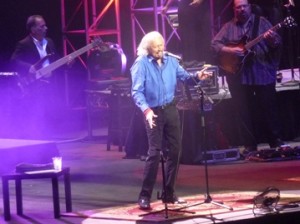 The Bee Gees were master songwriters. As a result the Bee Gees had so many hits but also other artists had great success by recording their songs. Last night, we were fortunate to hear many of those brilliant songs. We heard the dance songs such as ‘Jive Talking’, ‘You Should Be Dancing’ and their smash hit ‘Stayin Alive’. We also heard Bee Gees classics such as ‘Lonely Days’, ‘To Love Somebody’, ‘I’ve Gotta Get a Message To You’ and ‘Word’s. Barry Gibb also performed songs that the Bee Gees wrote for other artists such as ‘Island in the Stream’, ‘Guilty’ and ‘If I Can’t Have You’.

Barry also performed Bee Gees’ songs that weren’t hits such as ‘First of May’ and ‘Every Christian Lion Hearted Man Will Show You’ but nonetheless were great songs. He also played a few covers. The first cover he performed was ‘Fever’ but in his version he incorporated the lyrics and melody of ‘Stayin Alive’. He also performed a beautiful version of The Beatles’ song ‘The Long and Winding Road’ as a tribute to his “…favourite song writer…” Paul McCartney. Barry’s rendition started with his vocals and acoustic guitar in the 1st verse. After that, the band replicated the Phil Spector arrangement (which McCartney hated) but is still loved by many. 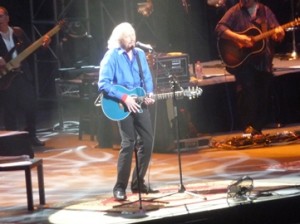 Barry’s son Stephen performed a solo spot in which he did a song written by Maurice Gibb called ‘On Time’. Maurice’s daughter performed a duet version of ‘How Do You Mend a Broken Heart’ with Barry. Both of the younger generation of the Gibb family did a great job.

During the show, Barry Gibb regularly spoke to the audience in a genuinely warm manner. At times he spoke about the Bee Gees time of growing up in Australia and sometimes he would talk about how or when a song was written. For instance, he explained to the audience that ‘Spick and Specks’ was the Bee Gees “breakthrough record”. Of course the audience absolutely loved this song, especially when Barry sang “…where is the girl?…” and the ladies started to call out his name.

As much as I loved this concert, I couldn’t help but feel a little sad knowing that Maurice and Robin Gibb have passed away. Even though Barry never showed the audience, it must have been very difficult for Barry to perform these songs without hearing or seeing his brothers with him on stage.
The song’ I Started a Joke’ sounded beautiful as the Melbourne audience sang along with Barry. However, during the bridge a video of Robin Gibb appeared and he was singing his part with the band. At that moment, I could feel the tears running down my face. It really was a bittersweet experience for me. It was great to hear Robin’s voice but it was sad knowing that he is no longer with us. At the end of the song, the audience must have felt the same way I did because there was a very long applause after the song. 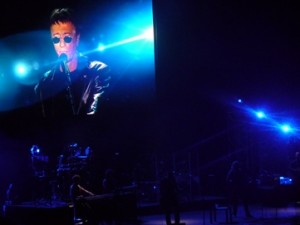 Robin GIbb on screen singing I Started A Joke. Photo by Steve Yanko.

Towards the end of the show, Barry Gibb spoke about his brothers. It was very nice to hear him describe the characters and traits of Andy, Maurice and Robin in a way that only a brother could. How difficult would have it been for Barry during this part of the show? Interestingly he said of his brothers that “…we were never closer than before we were famous…”. He then stated that the brothers thought that the next song he was to play as the “…greatest…” they wrote. He then played the beautiful song ‘Immortality’ (a duet the Bee Gees recorded with Celine Dion). At the end of the song there was a rapturous applause. 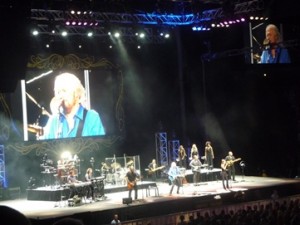 Barry Gibb with his band. Photo by Steve Yanko.

The Barry Gibb concert was one of the best I’ve been to. As a songwriter myself, I felt so inspired to be in the same room (or arena) as Barry Gibb. The Bee Gees music is part of our culture. The melodies and arrangements of the Bee Gees songs are superb. Obviously, without Maurice and Robin we didn’t hear all of the Bee Gees hit songs such as ‘New York Mining Disaster’, ‘Run To Me’, ‘Tragedy’, ‘Alone’ or ‘Massachusetts’. However, we did get to hear many fantastic songs written and performed by Barry Gibb and for that I’ll always feel fortunate that I attended last night’s show.

SET LIST
Jive Talkin’
Lonely Days
You Should Be Dancing
First of May
To Love Somebody
How Can You Mend a Broken Heart?
Fever (incorporated Stayin’ Alive)
How Deep Is Your Love?
On Time
The Long and Winding Road
I’ve Gotta Get a Message to You
Kilburn Towers
Playdown
Spicks and Specks
With the Sun in My Eyes
In the Morning
Every Christian Lion Hearted Man Will Show You
I Started a Joke
Islands in the Stream
Guilty
Words
If I Can’t Have You
Night Fever
More Than a Woman
Ordinary Lives
Immortality
Encore:
Stayin’ Alive