Today I attended my 1st ANZAC Day dawn service near my home. I wanted to go today because it is the 100 year anniversary of the landing of the ANZAC troops in Gallipoli, Turkey.

At the service, I was impressed by the large number of people who attended and the diversity of the ages and appearance of the people. Attending the service were war veterans, families, young couples, elderly couples, teenagers, people with Asian and European heritage. There was a cross section of society united together to commemorate the efforts of the ANZACs.

As I listened to the names and ages of the soldiers who died in the 1st World War (WWI), I started to think about their sacrifices. Many of the men who died in WWI were very young. These brave and heroic people sacrificed their lives in order to protect their country’s values and ideals. Primarily, these people fought to maintain our freedom.

Today many people in society take for granted that we are free. Some people complain that they have to vote in compulsory elections. Some people complain about politicians and the policies that they implement. There is nothing wrong with complaining about politics because these brave ANZAC soldiers fought in order for people to freely express their views. They fought so that people could be free to associate with whoever they wanted. They fought so that people could be free to choose who they wanted to be governed by. Basically, the ANZACs fought and many died in order for us to be free. Freedom is an essential part of our democratic society.

For many of us whose parents and grandparents were born overseas and came to live in Australia after World War 2 (WWII), ANZAC Day should be treated with reverence. If the Allied Forces did not win in WWII, whose parents or grandparents would choose to live in Australia? Do you think your parents or your grandparents would have chosen to live in a country where the people were not free and ruled by a foreign oppressor? It is more than likely that they would not have come to Australia and therefore the logical conclusion is that those of us with migrant backgrounds would not exist.

Our parents and grandparents came to Australia because it offered (and still does) people the opportunity to have a better life, freedom and economic prosperity. Had the ANZACs not prevailed in both of the World Wars and maintained our freedom, many could argue that Australia would not be the great country that it is today.

So today, on the 100 year anniversary of the landing at Gallipoli, all Australians should spend a few minutes in their busy day to think about the sacrifices that the ANZACs made in 1915 and the work of our Armed Forces since that time. In your prayers and thoughts say “Thank you” to these brave people and to their loved ones who had to and continue to endure sadness and loss.

Be grateful for the freedom you have and be proud to be Australian. 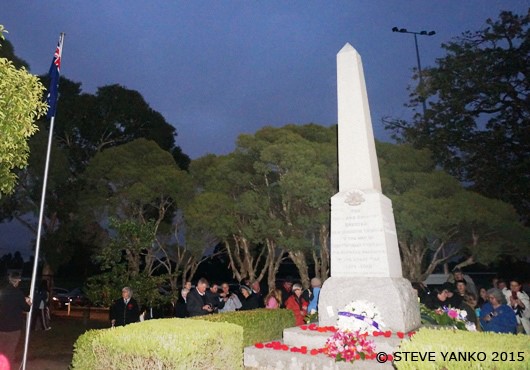