Ever since I first heard ‘Love In An Elevator’ in 1989 I’ve been a big fan of the band Aerosmith. Last night I went to my first Aerosmith concert and my appreciation for the band’s music only grew.

To many people, Aerosmith are considered to be one of the best rock bands to have come out of the U.S. Many people are also aware of Aerosmith because of the often reported reports about their excessive rock ‘n’ roll lifestyle even though the band members have been sober for many years. In fact, lead singer Steve Tyler’s autobiography ‘Does The Noise In My Head Bother You?’ is a fantastic book that sums up his journey with the rock ‘n’ roll lifestyle beautifully. However, before any band gets big enough to experience the rock ‘n’ roll lifestyle they need to 1 produce great music and 2 be able to perform live at an exceptional level. Aerosmith have these 2 elements and last night proved why they are still a popular band. 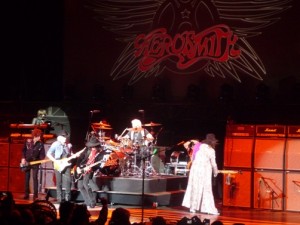 The show started with an energetic version of ‘Love In An Elevator’ and this set the precedent for a highly energetic concert in which the band were tight and the set list comprised of all of the band’s biggest hits.The main songwriters of the band Steven Tyler and Joe Perry also known as “The Toxic Twins” did a wonderful job of driving of the show while the other band members did their job as a tight rhythm section.

Steven Tyler is a brilliant front man! Last night he was flamboyant, engaging, in fine voice and he worked really hard to entertain the audience. From the moment he walked on the stage he got the audience involved in the show. It was difficult to take your eyes off of him because he is such a charismatic performer. 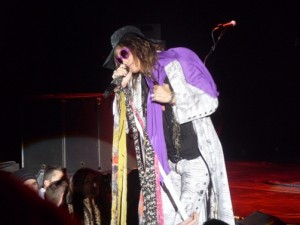 Joe Perry’s guitar playing was impeccable. Yes there was your typical guitar playing rock poses but his rhythm and lead playing was fantastic. For the guitar enthusiasts, Joe Perry used a variety of guitars including Gibson Les Pauls including a Joe Perry model, a variety of Fender Stratocasters and Telecasters. He also used a beautiful black Gibson Chet Atkins nylon string acoustic. He also used a Gibson Lucille model (like BB King uses) but called Billie which has a picture of his wife on the guitar. 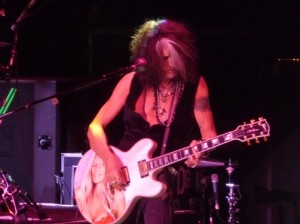 There were so many highlights for me during the show. For instance, during the song ‘Last Child’ they cleverly incorporated the main riff from the song ‘Sing A Simple Song’ (one of my favourite funk songs) by Sly and The Family Stone. Furthermore, Joe Perry took on lead vocals on a blues song called Stop Messin Around. This was the first time I heard him sing and I thought he had a great voice, of course, his blues guitar playing was brilliant. Aerosmith also played an awesome version of The Beatles’ classic song ‘Come Together’. Of course, hearing all of their big hits including the classic ‘Walk This Way’ is always a positive. I also loved it when Steven Taylor sat a baby grand piano and played ‘Dream On’ as part of the encore. 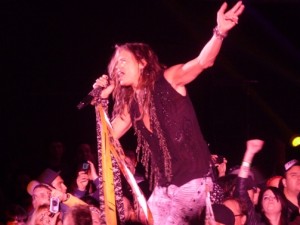 The great thing about last night’s concert was that Aerosmith played all their hits and as a result the audience got their money’s worth of entertainment. The band’s music is mainly based on the blues but their popular songs such as ‘Dream On’, ‘I Don’t Want To Miss A Thing’ and the brilliant ‘Janie’s Got A Gun’ show that the band can easily play pop music too. 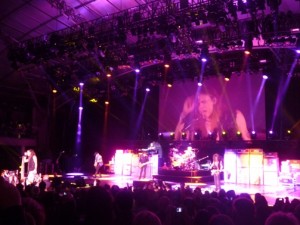 Overall, I loved every part of this concert. The music was fantastic, the audience were engaged and the credit for that has to go to the brilliant showmanship of Steve Tyler and Joe Perry. Aerosmith were professional, entertaining and put on a wonderful show and for that I highly recommend that when they return to Melbourne (or go to wherever you live) go and see them.